I would be interested in any information that you have on the Horan family and related families, such as Chapman, Ceely and Wren (and others).

I visited when I was in the area but the church was closed and so I just took a few pictures. I assume that some of my great grandparents' children were buried in the graveyard.

I have a note from Frederick Langston Horan, one of the Horans' sons, who left England for the States. My aunt kept in touch with granddaughters and I've now started corresponding with them. Most of the other surviving children, including my grandfather, went to Canada. I think I've worked out where all went except Alice Mary Horan.  Any sign of an Alice Mary Horan anywhere in Bapchild? She was still there in 1901. 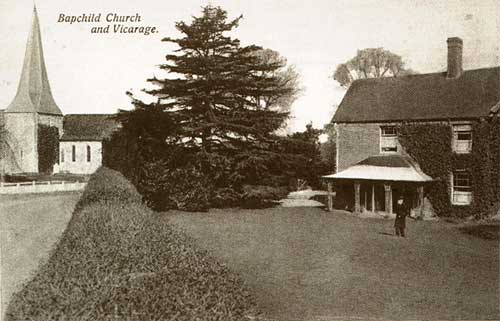 1881. James Horan graduated at the London Univeristy in 1863 with honours in French and German. He was also a good Musician as Bapchild knows well, for during his incumbency the choir was a well-known one in the Neighbourhood.

Through hid instrumentality some of the members have become organists and bandsmen. Ordained Deacon by the Bishop of Oxford in 1863 and Priest by the Bishop of Salisbury, he was first Curate of Stone (Bucks, 1863) and Coombe-Keyness with Wool (Dorest, 1865). From 1867 he held a three-years Chaplamey at Tours. He was afterwards Curate successively at Haywards Heath and Dounington (1872). He was the Vicar of Bapchild from 1881 to 1915, when he resigned owing to ill-health. He died at Aylesbury in 1916 and was buried there.

Taken from ‘A Short History of the Parish of Bapchild, Kent’  by Rev Hugh F. Lord 1926.