Whilst many politicians have already accepted that the Southern Relief Road will have no significant effect on solving the problems at Junction 5 on the M2, some including our MP and leader of the Council in spite of evidence to the contrary are still blindly backing the Southern Relief Road as the solution to the town’s traffic issues, if not the entire borough.

The first of the myths that the evidence provided by Kent County Council’s own Highways Department quashes, is that a Southern Relief Road will remove significant volumes of traffic from the A2, especially to the east of Bapchild. 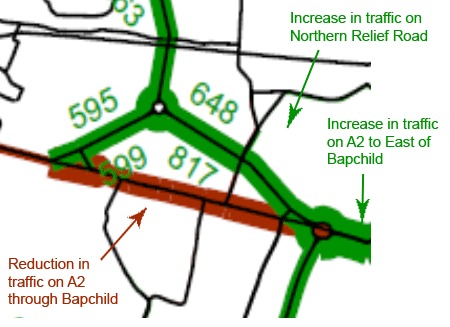 On the above illustration taken directly from the presentation made to the LDF committee it clearly shows a very thick green line on the A2 to the east of Bapchild. The thickness of the green line illustrates the volume of increase in traffic, the thicker the line the larger the increase. Red lines show a decrease in traffic.

I can only conclude that selective hearing is a factor in the opinions currently being voiced, because when it was announced that the Southern Relief Road provides some relief to the A2 East of the Town, a Councillor specifically asked whether that was a small increase, to which the answer was yes.

One must also bear in mind that this is a small relief on the previous study which showed a significant increase. So in effect this reduces by a small margin a massive increase to a slightly less massive increase. 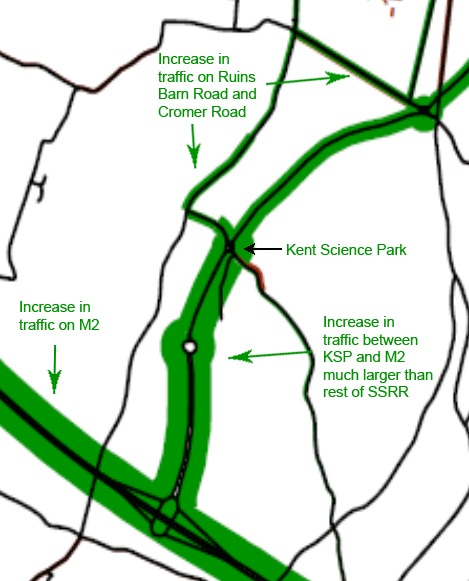 The second myth finally nails the suggestion that an enlarge Kent Science Park would be hugely beneficial for the locally economy employing mainly local residents. The model without dispute shows a significantly wider green line between the Kent Science Park and the M2. When approached KCC acknowledge that employment would mainly come from outside Swale.

The third myth that a Southern Relief Road would dramatically decrease rat running on rural lanes is also in dispute as the study shows an increase in traffic on both Ruins Barn Road and Cromer Road.

Faced with this evidence our elected officials are in denial insisting that we’ve misread the results, but we’re discussed the results with members of Kent County Council’s Highways Department whom agreed with our findings.

So far only our Kent County Councillor Keith Ferrin has voiced in public and in front of the very politicians who disagree that we are correct in our assumptions.