Concern at plan for Stones Farm

You are here: Home / News / Stones Farm / Concern at plan for Stones Farm
'We're having an estate slapped in our faces'

THE construction of 600 homes on farmland on the edge of Sittingbourne could begin as soon as the end of next year.

Plans for the controversial development at Stones Farm, Bapchild, were displayed at a public exhibition this week.

The main access will be via a junction off Fox Hill on the A2, while there will also be a park and 37 acres of open space to separate the estate from Bapchild and Tonge.

Paul Sharpe, of Paul Sharpe Associates LLP, acting on behalf of the landowners, said a request for outline planning permission could be made later this year, followed by a detailed application in 2011.
The proposals, which include two options for the layout, were on show at Bapchild village hall on Sunday and again yesterday (Tuesday). 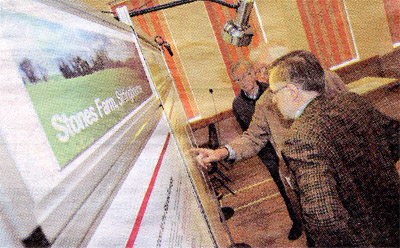 Among those unhappy with what they saw were residents of Peel Drive, Sittingbourne. The cul-de-sac has been earmarked as an access road into the new estate, to the dismay of people living there.
Roger Smith, who moved into Peel Drive in October, said: "This never came up in any searches by our solicitor when we bought the house.

"It's a nice, peaceful road and we do not get a lot of traffic at the moment.

"It seems odd that it could be a way through because it's a nightmare through those roads. When people come and visit they go wrong at least two or three times."

Gordon Belsey, who has lived in Peel Drive for 15 years, said he was told Stones Farm would never be built on. He added: "It's all elderly people in Peel Drive, Gordon Close, Roseberry Close. You buy those places thinking you will be there when you retire. If that becomes a through road we will end up with speed humps up there and it could easily become a rat run from that estate through to Mur-ston Road.

"It's not fair to any of them. If I could find a place to move I would."

Hempstead Lane resident David Ansell said the new homes would spoil his view and claimed Bapchild was being absorbed into Sitting-bourne. He added: "They're saying they are being sensitive to the area but they are not.

"We're having a housing estate slapped in our faces."

The consultation on the draft development brief will continue until March 8. To comment on the plans visit www.stonesfarm.co.uk or www.bapchild.info.

Don't forget to let the Gazette know what you think of the plans. Email newsdesk. gazette@krnmedia.co.uk or call the newsroom on 01634 236330.

The Stones Farm plan could incorporate a link with the proposed Northern Relief Road (NRR).
Kent County Council is expected to ask for people's opinions on a preferred route for the NRR next month.

Once built, the road will connect the A2 at Bapchild, near the cricket ground, with the A249 at Kemsley, completing the northern by-pass of Sittingbourne.