You are here: Home / News / Stones Farm / Housing threat to countryside
FARMLAND on the edge of Sitting-bourne has been urgently earmarked for 600 homes by Swale council.

Proposals for the development on Stones Farm in Bapchild have been drawn up and building work could begin at the end of next year.

Although a lengthy planning process must first take place, the principle of using the land for housing has already been agreed. 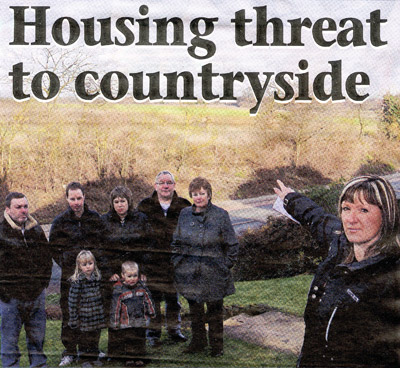 Straight to the point: Rose Sladden, pictured right, is among Fox Hill residents who are unhappy with the plans for 600 new homes planned for land on Stones Farm, Bapchild.

In a letter to Bapchild Parish Council, the borough council's head of development services James Freeman wrote that the borough had to meet the Government's targets for new homes. It was suggested the Stones Farm planning application be prioritised.

Bapchild villagers are now coming to terms with the fact a housing estate coudl appear on their doorsteps.

Rose Sladden, who bought her house in Fox Hill in December 2008, said: "I just cannot believe it. We waited a long time to get this house. If we knew they were going to be building there I don't know if we would have bought the property"

As well as ruining their view, Rose said she is concerned about extra traffic, the value of her home falling and the size of the new properties - some of which could be three storeys. She added: "They are going to spoil the countryside."

Residents in Peel Drive, Sittingbourne, are still reeling at the suggestion their cul-de-sac could be turned into a through road.

Ann Titcomb, who has lived there for seven years, said: "I'm coming up for 80 and my husband is 93. We both ride mobility scooters. Our fear is we are all going to be tied to our homes because we won't be able to go out because of all the traffic."

Paul Sharpe, of Paul Sharpe Associates, which is promoting the scheme, said a new road connected to Peel Drive would improve access to the new housing estate and provide a bus route. He added that "we are not wedded to it" and suggested the plans could be amended so it was a route exclusively for pedestrians, cyclists and emergency services.

Mr Sharpe said: "I sensed putting a connection through there would be contentious, which is why we let all the residents know along the length of Peel Drive."

People have until March 8 to comment on the draft proposals. Write to Paul Sharpe Associates, The Old Rectory, Broad Blunsdon, Swindon SN26 7DQ.