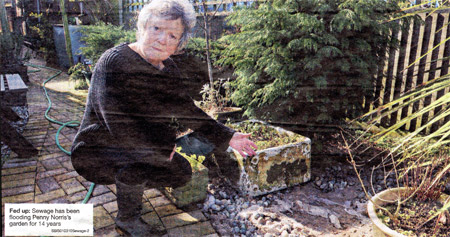 HEAVY rain caused sewage to pour into gardens in Bapchild where residents have been plagued by flooding for more than 10 years.

Penny Norris, 64, of The Street, was at her wits' end on Sunday when the sewage bubbled up through a drain at the end of her garden, flowed towards her house and seeped through her fence in to neighbours' properties.

Mrs Norris said: "Fourteen years of problems is too much, I've had enough. The sewage bubbles under the drain and the drain cover lifts under the weight of the water. I've had it gurgling in the toilet before and I've had to put all the plugs in the sinks in case it comes in.

"It's all on my plants, the garden is mucky and horrible and it's gone in next door's pond."
Mrs Norris blamed the problem on a faulty water pump close to the nearby Fox and Goose pub, also in The Street.

She said she has often seen Southern Water workmen at the pumping station and one was there last weekend.

And residents fear the problem will get worse when houses are built on farmland behind The Street.
Mrs Norris continued: "This normally happens when there's a freak flood or a real downpour which has been quite often in the last couple of years. If they build on land that would normally take water then more water is going to flow down into Bapchild village.

"This is such a pretty area and I love it here but I am seriously thinking of moving now. It is just going to get worse."

Mrs Norris said her late husband's doctor wrote to Southern Water to point out the health risks of having raw sewage so close to their home but it appeared to have no affect.

A spokesman for Southern Water said: "This incident happened because of heavy rain in the Sittingbourne area last week. The sheer volume of rain overwhelmed the sewerage system resulting in some localised flooding.

"We know incidents such as this are unpleasant and we apologise to those affected. We will investigate this incident to see what, if any, improvements can be made to the system."

Meanwhile, torrential rain caused problems in Stockbury where a pile of sewage, which villagers say has been stored in a field to the south of the village for several months, was washed down The Street into Bull Lane.

The farmer who rents the field the substance leaked from was unavailable for comment as the Gazette went to press.